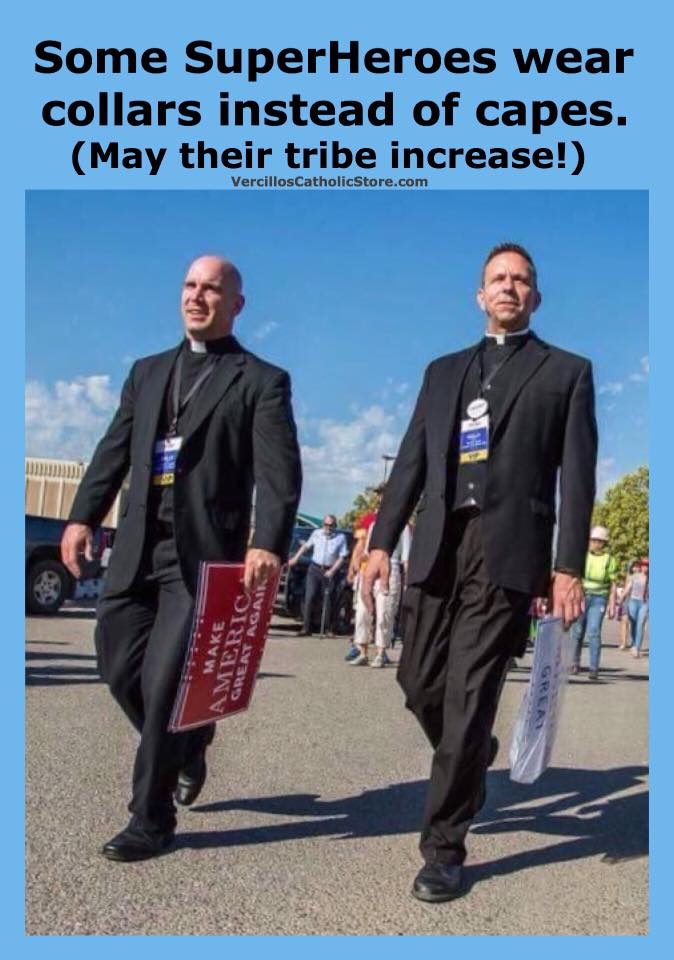 It was great to see #MyProLifePresident Trump honor #MyCatholicChurch by inviting these fine, young Priests to sit in the VIP section at his Montana rally in support of Senate hopeful Matt Rosendale who will replace anti-Life Jon Tester.

Outgoing (God wills it!) Tester earned a 100% rating from the extreme abortion radicals at NARAL for his support and promotion of legalized abortion, including partial birth abortion. Incoming (God wills it!) Matt Rosendale got the nod from CatholicVote.org, one of the largest lay-organized Catholic advocacy groups in the country. With over 500,000 members and engaged citizens in every state, CV seeks to educate, organize, and mobilize voters to protect and defend life, family and freedom.

Now meet Fathers Christopher Lebsock and Kevin Christofferson. These are the Priests, together with Fathers Ryan Erlenbush, and Garrett Nelson, who have the courage to lead God’s people in the U.S. back to where we belong – a nation that respects the dignity of every human being from womb to tomb – by witnessing to it at President Trump’s Montana rally for Catholic Pro-Life Senate candidate Matt Rosendale.

But as with all things good and holy, hell’s minions, some disguised as ‘Catholic media personalities’, and Priests and Presidents of no-longer Catholic Universities who stood with and supported anti-Life, anti-Catholic Obama and Hillary, are shooting flaming arrows at them in an attempt to bring down our Pro-Life President. (But like the foolish virgins in Matthew 25 their torches turned out to be duds fizzling from insufficient fuel.)

And then we have the wannabe infamous blogger, Steal MalNotACat, who self-identifies as Catholic (but one who has clearly ‘been there, done that, moved on’), was particularly venomous and inflammatory in her attack against these fine men of God, defaming their good names and casting aspersions on their intent (as though she could read their hearts).

Defending her ‘ConservatismIsDeadBecauseTrumpWon’ ideology with CCC quotes she chose to oppose that to which she supposedly espouses – “Love thy neighbor as thyself’ – as apparently, for her, does not include Catholic Priests.

Many Saints have warned against attacking Priests and the dire consequences thereof, especially through public calumny. Perhaps this CCC quoting, allegedly Catholic University grad, failed to get the memo on CCC 2479: “Detraction and calumny destroy the reputation and honor of one’s neighbor. Honor is the social witness given to human dignity, and everyone enjoys a natural right to the honor of his name and reputation and to respect. Thus, detraction and calumny offend against the virtues of justice and charity.”

A leftist ‘Catholic(?)’ tattle-call has gone out to ‘report’ Fathers Lebsock and Christofferson to their ‘boss’, Monsignor Kevin O’Neill while Obama and Clinton supporting activist Priests like Father Michael Pfleger are hailed as messianic prophets and visionaries.

All Pro-Lifers , including Catholics, are encouraged to counter the rehellious voices with our own calls of support for all four of these exemplary faithful Priests.

And when you’re done with that you can go over and support Pro-Life, Pro-Family, Pro-Religious Freedom, Pro-Constitution, Senate Candidate (no surprise that he is also a faithful) Catholic Matt Rosendale.
https://www.mattformontana.com/
https://www.facebook.com/MattForMontana/

And don’t forget to #PrayForPriestsPrayForMorePriests!