Father Dennis Brown is a Priest of the Oblates of the Virgin Mary serving in Denver, Colorado and offers these wise words on the formation of the man, Jorge Bergoglio, allowing us to better understand his person and his Office, and the method of his fulfilling his mission as Vicar of Christ.

“People, both those who label themselves liberals or conservatives or whatever, just don’t get Pope Francis…..because they still don’t understand that he is a Jesuit; and his tactics are Ignatian-Jesuit. And I might add very Ignatian.

“Saint Ignatius has rules for the discernment of spirits. On the more subtle level of discernment rule #4 is:

Spiritual Exercises #332 – “It is a mark of the evil spirit to assume the appearance of an angel of light. He begins by suggesting thoughts that are suited to a devout soul, and ends by suggesting his own. For example, he will suggest holy and pious thoughts that are wholly in conformity with the sanctity of the soul. Afterwards, he will endeavor little by little to end by drawing the soul into his hidden snares and evil designs.”

“Father Jules Toner, S.J. in writing about this rule comments:

The importance to Ignatius of this mode of deception is indicated by the fact that descriptions and illustrations of it abound in his writings. One description of it that is clearer and more precise than the rule itself occurs in a letter to two of the early Jesuits who were sent on a difficult mission. There we find a surprising and interesting turn of thought. Instead of speaking about the spirit of darkness modeling himself on an angel of light, he advises his men to model their tactics for the good of others on the tactics of the evil spirit when he is trying to harm them. Such advice may sound sinister; but the whole letter could be summed up as advising him men to be like St. Paul, whose words he quotes: ‘I have become all things to all men’ (1 Cor. 9:22) Ignatius’ point is that Satan does the same, only for contrary purposes.

“Here is the selection from the letter of Saint Ignatius:

“Whenever we wish to win someone over and engage him in the greater service of God our lord, we should use the same strategy for good which the enemy employs to draw a good soul to evil. He enters through the other’s door and comes out his own. He enters with the other by not opposing his ways but by praising them. He acts familiarly with the soul, suggesting good and holy thoughts which bring peace to the good soul. Later he tries, little by little, to come out his own door, always suggesting some error or illusion under the appearance of good, but which will always be evil. [Now here’s the note:] So we with a good purpose can praise or agree with another concerning some particular thing, dissembling whatever else may be wrong. After thus gaining his confidence, we shall have better success. In this sense we go in with him his way, but come out our own”

“Now is this a tricky “game.” It sure is, and I have made mistakes in my learning process of what Fr. John Hardon said “another word for ‘catholicity’ is adaptability, without denial of one’s divinely conferred identity.” However, it was advised by Saint Ignatius, a not unnoteworthy saint and an expert in being idealistic as a dove and shrewd as a serpent, with no small emphasis on the latter. {obviously always from a motive of charity}”

As I see it: The righteous are already saved; the self-righteous believe themselves to be. The former no longer require help; the latter deny the need for it. The first follow the Shepherd’s voice; the second refuse to hear it. Pope Francis, like the Good Shepherd that he truly is, has gone in search of the third… 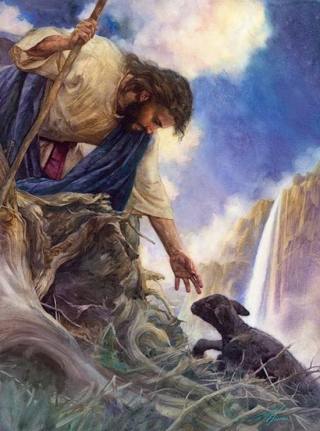