Archbishop Jose Gomez, of the Los Angeles Diocese became the newly elected President of the United States Council of Catholic Bishops (USCCB) today, November 12, an almost  assumed outcome after having served as Vice President since 2016,

Archbishop Gomez’ comments to the Catholic News Agency following his election included the assurance of,

“The reality of the bishops in the United States is that we all are faithful to Pope Francis.”

The newly elected USCCB President also pointed out the distinct way in which each Pope guides the Church.

“Every pope brings some different aspects in the life of the Church that he, by the grace of God, believes are important. And we, the bishops of the United States, are trying to be more aware of what those things are, and try to make it happen in our ministry.”

Acknowledging that Pope Francis’ governance over the Church is different than recent Popes, Archbishop Gomez explained that,

“I think it takes time for people to really understand the spirituality of Pope Francis… there are many, many aspects that are different. They are cultural and spiritual; it’s the first time in the history of the Church that there is a pope from Latin America. And some of us, who have that experience, know that it is different from the culture in Europe, or in the United States, or in Asia.”

A Treasure of Spiritualities

Calling attention to the numerous spiritualities in the Church, Archbishop Gomez said,

“It’s also the first time there is a Jesuit who is the pope. So every religious community, and the diocesan priesthood, have different spiritualities.”

“So I think we the bishops of the United States, and I personally, are learning how to appreciate the different aspects of the spirituality and the culture of Pope Francis.”

As the first Latino elected to the post, Archbishop Gomez, pointed out that not only does each country and each religious order have their unique spiritualities but also,

“every bishop has his own spirituality, and his own ministry in the diocese, according to the needs of the people in the diocese… San Antonio was basically a community of two cultures: Hispanic culture and the Anglo-Saxon culture. Now in Los Angeles we have people from all over the world. So my ministry is different,” said Archbishop Gomez.

“San Antonio was basically a community of two cultures: Hispanic culture and the Anglo-Saxon culture. Now in Los Angeles we have people from all over the world. So my ministry is different,” he said.

A final word from the newly elected President of the USCCB:

We pray for Archbishop Gomez as he assumes the leadership of the the U.S. Bishops national conference. 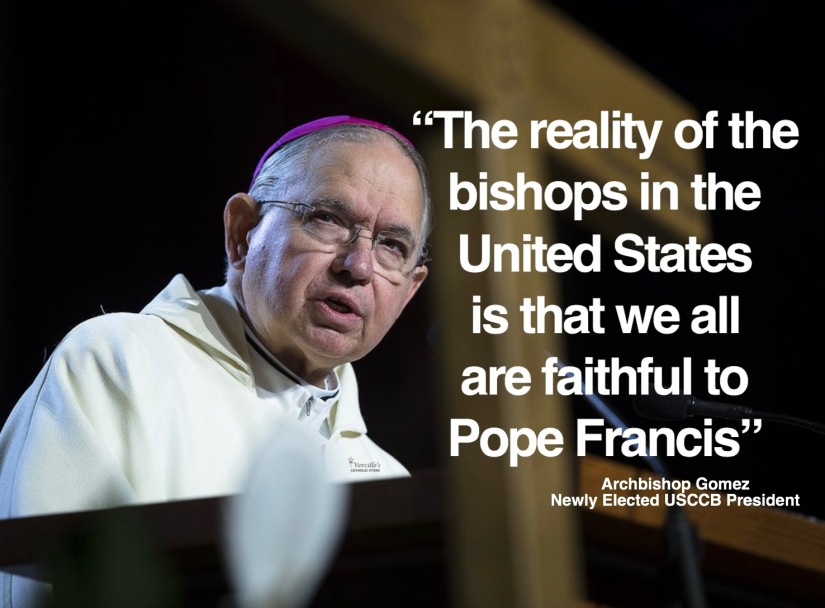