VATICAN CITY, ROME. The major players of the DeposeThePope Campaign showed up in Rome on Saturday, Sept. 28 (the symbolic act acted out on the vigil of the Feast of the Archangels was lost on passersby), along with their 200 minions (50 devotees each) to exorcise the Vatican of the Pan-Amazon synod demons that are threatening to destroy the Catholic Church through the efforts of (obviously) the anti-Christ.

Reminiscent of a scene from the indie film, Zombies Alive!, members of the Worldwide Lay Coalition of 200 were strategically placed along the Via della Conciliazione, between the Castel Sant’Angelo and Saint Peter’s Basilica (also symbolic), to maximize camera angle shots to perceive (or deceive) a larger turn out. “How can we make 200 look like 200,000,000?” someone asked.

As reported by DMontagna of LifeSiteNews for trulytimesdotcom the Worldwide Lay Coalition of 200 assembled to pray “as a united army from the enemies of God and the Church…” to “appeal to the angels in opposition to the evil spirits of the Amazon,”

The native residents of Brazil, Peru, Colombia, Venezuela, Ecuador, Bolivia, Guyana, Suriname and French Guiana expressed their displeasure over the negative species profiling by the Worldwide Lay Coalition of 200 and have demanded an apology.

What is worth noting is that many who were once considered ‘friends of the movement’ have distanced themselves from the self-described Worldwide Lay Coalition of 200 believing that it has become radicalized by unknown (or known) spiritual forces and they fear that the Worldwide Lay Coalition of 200 is now a greater danger to the Church than the working document to the upcoming Pan-Amazon synod.

“Maybe we should wait to see what the concluding document says before we go all ‘Repent The End Is Here!’ on the world”, a Worldwide Lay Coalition of 200 defector was quoted as saying recently.

In a seeming contradiction to what the Worldwide Lay Coalition of 200 deems an inappropriate and unacceptable response, the exorcism was conducted in ‘silence‘, something for which they have heavily criticized the Supreme Pontiff.

While exorcisms are best left to the Ordained Clergy, none seemed to be present at the event. Cardinal Burke and Bishop Schneider (they do not represent the body of Bishops), who have been vocal about the dangers lurking under every (Amazon) rock were conspicuously absent from the event, as well as certain Priests who have written and spoken favorably of the DeposeThePope Campaign. (See footnote #351 for complete list of all 5 of the usual troublemaking suspects.) Although a later, amended report, mentions unnamed Priests who clandestinely gathered in an unnamed church “close to the Castel Sant’Angelo” who privately, and again, ‘silently’ prayed Pope Leo XIII’s Prayer of Exorcism (the longer form of the prayer to St. Michael) with the intention of  “expelling the diabolical affect from the Vatican, primarily of the Amazon Synod.”

The effort appeared to have failed as the Vicar of Christ, Pope Francis, was seen still in residence today, Monday Sept 30, at the papal residence (Sant’Marta), enjoying a hearty ‘working’ lunch with faithful Cardinals, Bishops, Priests, and laity after a busy morning issuing an official declaration making Sept 30 ‘Word of God’ Day for the universal Church. (The symbolism of it also being the Feast of St. Jerome was not lost on the faithful.)

The referenced article and photos can be viewed at: 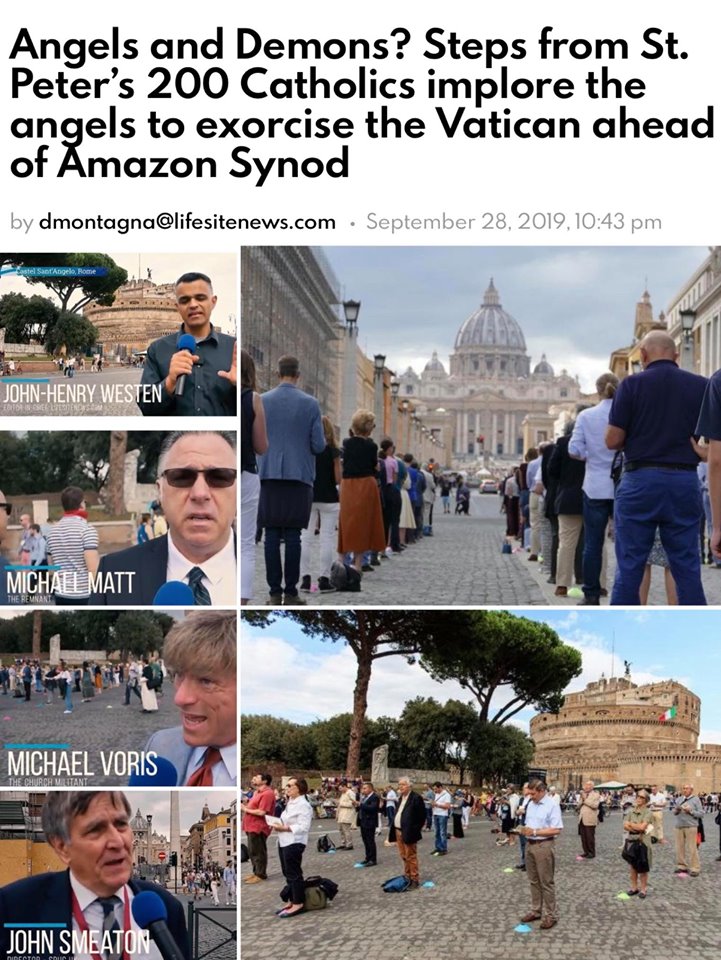