December 21st is the ‘shortest’ day (and the longest night) of the year. It’s also the day the Church celebrates the 5th O Antiphon, O Radiant Dawn, on the final countdown to Christmas. 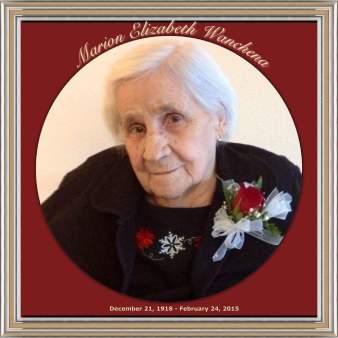 She would have been 100 years old today, something she’d mused many times, had she not been born into eternal life four years ago. I don’t think she’s disappointed she didn’t make it.

At Mass this morning I experienced one of those ‘overload’ moments; when several previous ‘awarenesses’ come together to form a single reflection. I was awestruck to the point of goose bumps.

A convert to the Catholic Faith from the Methodist denomination, my mother never ceased to be humbled and grateful that her parents chose to name her Marion Elizabeth, for it was Mary who pointed her to the Church when she was still a child.

Her own mother had died and left a bewildered 12 year old devastated at the loss. After the funeral, family and friends gathered in the family home, including the Catholic ranch hands 12 year old daughter who quickly sought ought her friend, Marion Elizabeth.  Not long after the two girls ‘escaped’ out the back door and headed towards town, a few blocks walk. They passed the Catholic Church and the ranch hands daughter mentioned that it was her Church.  Marion Elizabeth said she’d never been in a Catholic Church before, so the two girls ventured in.

I can still hear my mother relating again the experience she had entering a Catholic Church for the first time – “… like someone was watching us. Someone very warm”. When she saw the statue of Mary, off to the side of the Tabernacle, she asked her friend, “Who is she?”

“That’s Mary, the Mother of Jesus”, said her friend.

“Then you can be my mother now too”, Marion Elizabeth replied. And as she made eye contact with the statue she felt interiorly that her desire had been fulfilled.

That moment began my mother’s life long devotion to the Mother of God; a secret one at first, but by the time she met my Catholic dad, the now 19 year old ‘daughter of Mary’ was ready to put it on public display. She wanted to learn about this Church that held ‘her Mother’ in such high esteem.

They were called ‘inquiry classes’ back in the day and they were usually one-on-one; Priest and inquirer. The Priest would present and explain a doctrine of the Catholic faith and the inquirer could ask questions. My mom had a lot of questions!

But when the instruction on the Eucharist was presented she had no questions at all. She suddenly knew. This was the ‘Someone’; the ‘warm’ Someone, whose Presence she had felt as a 12 year old child with her first ever visit to a Catholic Church. That experience never left her.

When Elizabeth heard Mary’s greeting,
the infant leaped in her womb,
and Elizabeth, filled with the Holy Spirit,
cried out in a loud voice and said,
“Most blessed are you among women,
and blessed is the fruit of your womb.

Marion Elizabeth was forever in awe of her two patronesses, something God had planned from before she was born, and her favorite meditation for this blessed day of her birthday was the Church’s medieval hymn:

Prayers that my mother now dwells in the everlasting Radiant Dawn.